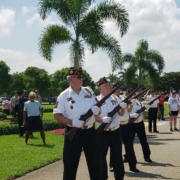 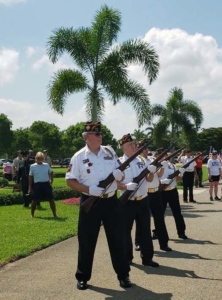 Your VFW’s Post-7721 has assembled a “Formal Ritual Team,” which will conduct ceremonial functions in a way, that will effectively dramatize the basic principles on which, the VFW’s is founded and Post-7721.

Some of the duties of the Ritual Team are: Color Guards, Parades, Folding Flag of the United States & Meaning of each 13 folds, Honors Rifle Team Salutes, Memorials, Funerals, Pre-senting a Wreath, Retiring Colors, and Bugler Sounding of Taps to name a few.

Volunteers will be trained, before performing in any ceremony, by skilled VFW’s Post-7721 Trainers, who have been taught formally, by their different military services according to FM 3-21.5 Military Drill & Ceremony and within the VFW’s Congressional Charter By-Laws Manual of Procedure Ritual.

Remember, “Ritual Team, service is the essence of greatness. All great men and women became great because they gave their talent, ability, and time in the service of others.”

Want to join the discussion?
Feel free to contribute!